The purpose of this page is to document my experience with repetitive strain injury (RSI) in a tendon of my right pinky finger. My case was due primarily to keyboard typing, although it may have been exacerbated by bicycling and yard work. I would suppose that many people have had this problem without a complete diagnosis or an optimal treatment plan. Both the cause and the proper treatment of pinky RSI differ in important ways from "standard" keyboard RSI.

The problem and its solution

Here is a standard diagram of a computer keyboard, color-coded by which finger is recommended for which key in standard touch typing. 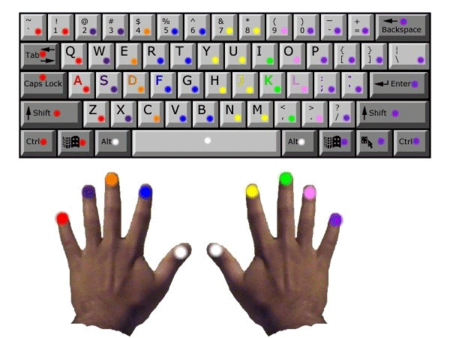 (There is actually more than one common touch-typing scheme and I don't mean to imply that this is the main standard. They all suffer from the problem that I will describe.) The diagram shows an obvious problem with the standard: The right pinky is used for 16 keys, and the left pinky for 10 keys, while every other finger is used for at most 8 keys. This may not matter much for typing text in English. However, a lot of computer typing these days is nothing like English. For example, here is some Perl code from one of my scripts:

Incredibly, the right pinky is used in fully half of the characters in this code snippet. Most of the main computer languages, from C to HTML, rely on the right pinky more than any other finger in either hand. In my case, this led to extreme pinky overuse and, worse, typing with my hand twisted (ulnar deviation): 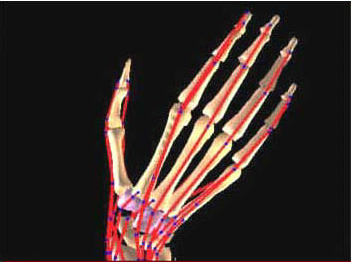 These ill-advised typing habits eventually led to enough pain that I could not do much work at the computer. The pain was on the palmar, ulnar side of my wrist. I think that the relevant muscle is the flexor digitorum superficialis, which attaches at the elbow. The flexor digitorum profundus is the other plausible candidate; hand experiments suggest to me that my injury is in the superficialis tendon.

I tried a variety of standard remedies that may or may not have helped (see below), but the most important long-term solution was a non-standard keyboard mapping. I moved eight of the symbol keys from the main keyboard to the function keys on the fifth row. Crucially, in order to retrain, I disabled the usual keys for these symbols. I still occassionally use my right pinky for some keys in its column, and the enter and shift keys.

However, even remapping the keys is not a full solution; it has to go hand-in-hand (har, har) with other common-sense steps. First, all of the good ideas together changed a slow downward spiral to a slow upward spiral; satisfactory recovery still took months. I cannot call it a full recovery, which I suspect will never happen. Second, I have to consciously avoid ulnar deviation, which is not easy. To do that, I keep my wrists relaxed, and I do not press my palms against wrist rests while typing — the best wrist rest is my lap. Third, if my pinky feels sore or wrong, I shift more of its typing load to another finger on my right hand, still avoiding ulnar deviation.

Both the soft keys on my laptop and a curved keyboard help some with hand relaxation; I have not yet obtained the perfect keyboard that has both.

How to remap the keys in Linux

Modern Linux installations use a keyboard coding system called XKB (X Keyboard Extension). I figured out how to reconfigure XKB so that I can turn keyboard remapping on or off with a one-line command. My files for this solution are here. The remapping is as follows:

It would be even better if I could remap the keyboard with "hot keys" or a desk applet, and better still if I had a solution for Mac OSX or Windows. But I don't know how to do these things.

Not the problem and not the solution

To add to the confusion, chronic tendinitis may well be misnamed. An "itis" is an inflammation, which means technically that tissues are swollen in response to a real or phantom injury. It has been argued that many cases of chronic "tendinitis" should be called "tendinosis" or "tendinopathy". (For example, this medical review argues for it.) An "osis" is a condition in which tissues are damaged but not necessarily inflamed. This distinction is medically important, because when tendon inflammation is the underlying problem, it will likely go away a lot faster (on the order of weeks) than tendon damage would (on the order of months). Many kinds of inflammation can also heal completely. Tendinosis means a tendon with many tiny tears that might not heal without scarring. Whereas carpal tunnel syndrome is recognized as a potentially long-term condition, long-term conditions that are called "tendinitis" are not fully appreciated as such because of their name.

Likewise, when typing causes any kind of RSI, the standard solutions treat different typing tasks as equivalent. (More precisely, that the differences average out for most typists.) These solutions include split keyboards, wavy keyboards, the Dvorak keyboard, advice about posture, and taking breaks. In the case of chronic pinky RSI, these proposals are sort-of reasonable, but ultimately beside the point. Typing computer code is fundamentally different from typing text. Natural keyboards and good posture may reduce ulnar deviation, but they do not reduce the disproportionate load on the right pinky, while the Dvorak layout may make it a bit worse. Taking breaks is fine advice along the lines of "all things in moderation". However, you may still have a lot of typing to do even if you do take breaks, and you may still be on a downward spiral if your condition is an "osis" rather than an "itis".

I emphasize that the Dvorak keyboard solves an interesting problem, but not my problem. The pile-up of symbol keys at the right pinky is obviously terrible ergonomics. It is so plainly wrong that people would rather discuss more interesting problems, like the arrangement of the alphabet keys. Many problems in the real world go unsolved because they are eclipsed by more interesting but less pressing problems.

Another proposed solution in cases of significant RSI is surgery. Now, surgery is clearly necessary for a wide variety of medical conditions. When I broke my ankle, I had very successful surgery to put it back together again. However, surgery is a last resort among medical treatments. It can create or worsen chronic conditions just as easily as it can cure them. I have no idea whether anyone reading this does or doesn't need surgery; I have every reason not to give any specific medical advice on that point. However, in my case, the main goal was to change my typing habits so that I wouldn't eventually have to have surgery.

Although self-diagnosis should always be taken with a grain of salt, I think that my right pinky tendon always gets sore more easily than my left pinky tendon. I notice the condition after using a standard keyboard for one to three days. So I think of remapping the keyboard as a permanent workaround to a permanent condition.